The Akbash dog (from Turkish: Akbaş ‘white head’ [1]) is native to western Turkey in the region known as the Akbaş, and it is primarily used as a livestock guardian dog, but is also recorded to be used as a shepherd dog. It is officially recognized by Köpek Irkları ve Kinoloji Federasyonu(KIF) aka the Turkish Kennel Club

This breed was introduced to North America in the 1970s by Americans Judith and David Nelson[3] who had been conducting research on white coloured dogs in Turkey.

Archeological evidence suggests that the earliest civilizations arose in the parts of the world began to domesticate animals and cultivate (or domesticate) plants. In short order there would have been a need for livestock protection dogs to care for the livestock.

The other white breeds of livestock protection dogs from around the world include, but may not be limited to:

The Akbash is a large dog, weighing from 75 to 140 pounds (34 to 64 kg), averaging 90 pounds for the female, and 120 pounds for the male. Akbash dogs range from about 27 to 34 inches (69 to 86 cm) tall. The Akbash is leaner than other Turkish livestock guardian dog breeds (i.e.: Kangal, and Anatolian Shepherd), and some Akbash dogs may also be taller.

The Akbash has a smooth-short to medium-full white double coat (sometimes with some light biscuit coloring at the ears). It has long legs, a tail that curls and is frequently feathered, and pink skin blotched with black or blackish-brown under its white coat. Eye rims, nose and lips should be completely black or blackish-brown for the show ring, but commonly they may have some pink.

It is believed the ancient genetics of the Akbash dog were founded on a combination of molosser and sighthound breeds. The Akbash possesses characteristics of both. Although there is a lot of variation in size and height in the Akbash breed, Akbash dogs have a reputation for being tall with long strong bodies. Most appear statuesque and are quite flexible for dogs their size. They have loose skin around their necks to help protect them from predators. Heads range from medium to heavy for working breed dogs. Purebred Akbash dogs may or may not be born with rear double dewclaws. Lack of, or possession of rear double dewclaws in an Akbash is no indication of recent interbreeding with other livestock guardian breeds nor any other breeds. 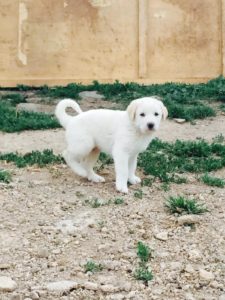 The Akbash personality tends to be calm and aware. As a breed, it is not shy, nor is it aggressive. When used as a protection dog, it is suspicious of strangers in its territory, and unusual sounds and changes in its environment. The breed is not naturally hostile, and is, instead, naturally discerning, bred to think independently. The Akbash can be powerful against predators, yet, when properly exposed, be gentle with newborn lambs and goat kids. The usual first means of protection by an Akbash is prudently warning potential threats by barking or growling. The Akbash will chase away a predator, or physically protect against it, only if it deems that wise and necessary.

The Akbash is frequently mistakenly referred to as a herding dog, but are actually working dogs bred to live with and protect livestock, usually goats and/or sheep, and should not chase their charges, (although in some rare cases they may move their charges away from danger). Akbash is one of the more popular of about 30 breeds worldwide under the heading of Flock Guardians, Livestock Protection Dogs, or Livestock Guardian Dogs (more commonly: LGDs).

In their roles as livestock guardian dogs, Akbash dogs frequently spend long hours lying with flocks or herds. The Akbash is a relatively low energy breed, although they are said to always be thinking and taking in what is happening around them (and that they “sleep with one eye open”). They regularly patrol the perimeters of their territories, and listen and smell beyond any fence lines. They reserve much of their physical energy for emergencies when they may encounter a predator.

The Akbash is uncommon as a companion dog. When trained appropriately from puppyhood on, it will get along with other domestic species. Since the Akbash has been bred to think on its own, dogs of this breed might be reluctant to adapt to obedience exercises. They have been bred not to chase their charges, so tend not to be interested in chasing balls or in games of fetch. They prefer large areas and may become discontent and exhibit problem behaviors, like escaping or being destructive, if relegated to a pen or small yard. Akbash dogs require tall secure fencing for best containment. The Akbash is not a dog for everyone. It is a working breed and is happiest when given a job compatible to its breeding, or at the least, when kept mentally engaged. These dogs are known for their intelligence, bravery, independence and loyalty.

Akbash dogs, like many large breeds, can be expected to live 10 to 11 years on average, with some living much longer. Akbash dogs are capable of bonding very closely with their owners and other animals and can display a range of emotion and sensitivity unlike many other breeds.